Our contribution to scientific literacy

Forscherwelt or Researchers‘ World is an international education initiative by Henkel. Its goal is to promote the basic scientific education of young children.

The Forscherwelt initiative itself started small in 2011 at the extracurricular learning venue for young children in Düsseldorf – Forscherwelt. Unlike a traditional school lab, in addition to the experimentation area it offers children places to relax, as well as spaces for movement, mutual exchange and reflection.

Initially designed for employees’ children only, the content of the program is based on Henkel’s own research areas. It includes specialized vacation courses and teaching modules on the topics of gluing, washing, personal care and sustainability. There are also training courses for teachers.
In the meantime, the vacation program for the employees’ children has become a popular extracurricular learning venue for local elementary schools. And since 2014, the Forscherwelt initiative has gone international. At Henkel sites from Asia and the Middle East to North and South America, the initiative is committed to basic science education. Under the motto “Forscherwelt to go,” there are mobile programs for and at schools, regular courses at extracurricular learning sites run by partner organizations, and digital modules.

Dr. Simone Bagel-Trah, Chairwoman of the Supervisory Board and the Shareholders’ Committee of Henkel, was herself interested in “experimenting” from an early age. Her own fascination for the sciences has led the doctor of biological science to put in place a system that shows children how much fun can be had by “playing with science” in their formative years. Under her patronage, Henkel launched the long-term educational initiative for children in April 2011, aimed specifically at younger children up to 10 years of age.

“There is so much in this world to discover. That’s why curiosity, having the courage to ask questions and finding the fun in researching are what lie at the roots of our ‘Forscherwelt’ initiative – igniting children’s interest in the sciences.”

Dr. Simone Bagel-Trah, Chairwoman of the Supervisory Board and the Shareholders’ Committee of Henkel

“Be like a researcher”: This is the motto of Forscherwelt and the basis for the teaching concept.

The overall goal of the architectural concept is to create an atmosphere in which the children feel at ease and to provide an ideal environment where they can have fun while learning.

Learn more about the offers and programs of Forscherwelt.

Contact us if you have any further questions about the initiative.

The winning students in the Forscherwelt Science Lab competition have been announced at the German Pavilion at Expo 2020 Dubai. In an award ceremony led by Csaba Szendrei, President Henkel GCC last Thursday; Aliya Abdul Gafoor from Woodlem Park School, Riya Wynn from Gulf Indian High School, and Amaal Hamad from GEMS FirstPoint School, were celebrated for their creative designs, which stood out to the judges amongst the submissions from over 1,000 students aged 7 to 11 from 14 schools across Dubai.

Over 1000 school children across Dubai between the ages of 7 and 11 are preparing their entries for the Forscherwelt Science Lab competition, designed exclusively for Expo 2020 Dubai. Thirteen of Dubai’s leading schools have signed up to the free competition with their eager science students creating something out of recycled materials that is both innovative and serves a practical purpose at their school. The winning entries will be awarded at the German Pavilion during a judging and recognition event in March.

And the winner is...🏆 Our new #Forscherwelt website received the @EEA_Info Award in the category “Website & Microsite”. The #EEA2021 winners were announced during today’s digital award show. Take a look at the award-winning website here👉 henkel-forscherwelt.com https://t.co/wkwiiMeWSK 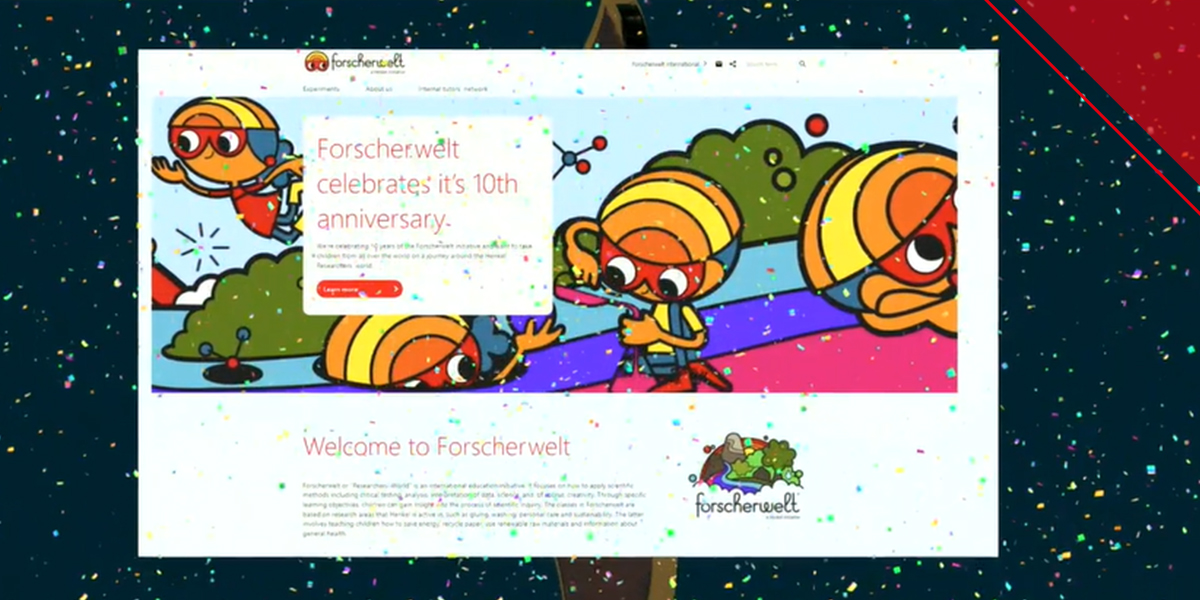